The famous Phyllopod Beds of the Walcott Quarry. Image from The Burgess Shale Geoscience Foundation

The Burgess Shale biota, first discovered by Charles Doolittle Walcott in 1909, was revolutionary as the first indication of the great diversity of soft-bodied animals that normally do not fossilize. This window on the diversity of the upper middle Cambrian fueled debates regarding the "Cambrian Explosion" and the origins of phylum-level diversity. As in the Chengjiang lagerstatte, soft-bodied animals are preserved in the Burgess Shale, revealing a great diversity of early arthropods, as well as such curiosities as anomalocaridids and Hallucigenia. Unlike Chengjiang, where only four species of trilobites are known, 13 genera of trilobites have been recorded in the Burgess Shale, though trilobites make up a small percentage of the total  fauna. Here are four representative species:

Some trilobite specimens from the Burgess Shale have their soft parts preserved, such as antennae and limbs, as is apparent in the remarkable Olenoides serratus specimen above. It is notable that the trilobite fauna of the Burgess Shale, being a late Middle Cambrian locality, is not dominated by Redlichiida as at Chengjiang, but by a mix of Ptychopariida, Corynexochida, and Agnostida. In addition to trilobites, there were other species of arachnomorph (trilobite-like clade) arthropods such as Helmetia, Tegopeltes, and Naraoia. These trilobite-like arthropods demonstrate that the group from which trilobites arose was itself successful and diverse, though being uncalcified, are only preserved at exceptional lagerstatten such as the Burgess Shale and Chengjiang. Because the Burgess Shale was the first lagerstatte with such exceptional preservation, other sites with similar preservation are referred to as "Burgess Shale type" lagerstatten.
TRILOBITA OF BURGESS SHALE 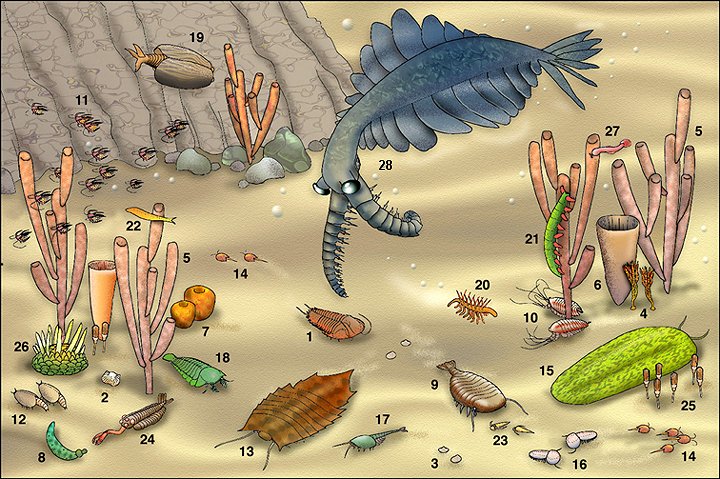