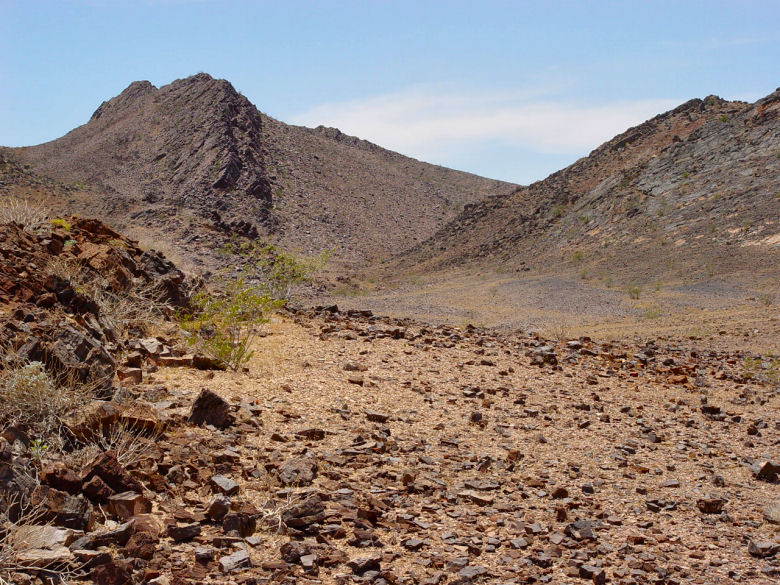 
In the Cambrian, the continent of Laurentia (now the majority of North America), was near equatorial, and oriented about ninety degrees from its current position. Close to the shorelines of Laurentia, limestone was deposited as shallow-water reefs. Beyond the limestone belt, fine sediments built in deeper offshore contours, sometimes rapidly via undersea landslides off the reef platform. These offshore deposits along the paleoequator include much of the Wheeler Shale, the Burgess Shale of western Canada, and other sites from California through Utah to the Northwest territories of Canada. All of these sites yield remarkably preserved Cambrian fossils.

The Marble Mountains is one of the best-known and most productive Cambrian trilobite localities in the state of California. This is a rather small mountain range in one of the harshest, driest parts of the Mojave Desert, in southeastern California near the towns of Chambless and Cadiz. Its trilobite-bearing rocks include exposures of the Latham Shale, but there are several related formations represented in San Bernadino, including (from oldest to youngest): the Wood Canyon Fm., Zabriskie Quartzite, Latham Shale, Chambless Fm., and the Cadiz Fm. These are all of Early Cambrian age, in the Waucoban Stage, upper Bonnia-Olenellus Zone. Outcrops occur throughout the Mojave desert in the Marble Mts., Providence Mts., Kelso Mts., New York Mts., Mesquite Mts., and the Silurian and Salt Spring Hills.

The Latham Shale is of late Early Cambrian age and occurs in outcrops scattered widely throughout San Bernardino and Inyo Counties, California. At least 12 trilobite species (mostly olenellids) have been documented there. The lower parts of the Bright Angel Shale, Arizona; the Pioche Shale, Nevada; and the Carrara and Saline Valley Fms., California are considered of equivalent age. The Latham Shale occupies the Bristolia subzone, oldest of the three subzones of the Bonnia-Olenellus Zone. Specimens below are from the Latham Shale and equivalent-aged formations.

It is notable that the trilobite fauna of the Latham Shale, being a Early Cambrian locality, is dominated by Redlichiida, Suborder Olenellina. The Latham Shale has also yielded other fossils, including some of the earliest articulate brachiopods (brachiopods with hinge teeth) known. Hyoliths, (Mount 1974, 1980) and trace fossils left by worms, trilobites, and other invertebrates are also fairly common. Eocrinoid echinoderms, segmented worms, algae, and the appendages of Anomalocaris have been found (Durham 1978; Mount 1980; Briggs and Mount 1982; Waggoner and Hagadorn 1999).

TRILOBITA OF THE LATHAM SHALE FORMATION, CALIFORNIA
courtesy of the Western Trilobites Association


Briggs, D. E. G., and J. D. Mount. 1982. The occurrence of the giant arthropod Anomalocaris in the Lower Cambrian of Southern California and the overall distribution of the genus. Journal of Paleontology 56:1112-1118.

Palmer, A. R., and R. B. Halley. 1979. Physical stratigraphy and trilobite biostratigraphy of the Carrara Formation (Lower and Middle Cambrian) in the southern Great Basin. U. S. Geological Survey Professional Paper 1047:1-139 p.

Waggoner, B. M. and J. W. Hagadorn. 1999. Unusual Lower Cambrian fossils from the Latham Shale: What, if anything, is a Lagerstatten? Geological Society of America Abstracts with Programs 31(6):A105.

Localities of the Cambrian: The Marble Mountains. by the University of California, Berkeley Museum of Paleontology

Collecting Trilobites in California. by the California Fossil Forum

Paleontological Tour of the Mohave Desert by J.D. Mount.

Back to Famous Trilobite Localities