The Hypostome
Last revised 02 December 2007 by S. M. Gon III
©1999 - 2002 by S. M. Gon III. Created using Macromedia Freehand 8.0
.
Details of hypostome structure and attachment:
Although there is significant variation among hypostomes of different species of trilobites, the details of the hypostome of the trilobite Ceraurinella typa (Phacopida:Cheirurina) illustrates some key features:


How are the hypostomal types related to trilobite classification?
Some trilobite orders are marked by having most of its members share a certain condition. For example, most of the order Ptychopariida have natant hypostomes, while most of the suborder Illaenina have impendent hypostomes. While there are exceptions to these patterns, the underlying shared characters provide part of the foundation for evolutionary patterns among the trilobites, important in higher level (e.g., order or suborder) classification. Fortey (1990. J. Paleontology. 33:529-76) reviewed the nature of hypostome attachment in trilobites and used combinations of ontogeny patterns and hypostomal attachment to augment the morphological basis for defining trilobite orders. Some additional general patterns are highlighted below:

If you want more detailed definitions of the terms above, I have provided a glossary of terms.

Meanwhile, here are more examples of hypostomal attachment patterns in a variety of trilobites.
In addition to hypostomal patterns, you may notice other ventral cephalic patterns typical of various orders including:
1) very wide rostrum (pink) in Redlichiida, 2) loss of rostrum in Phacopina, 3) ventral median anterior suture in Asaphida 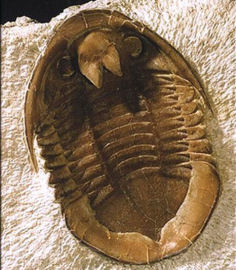